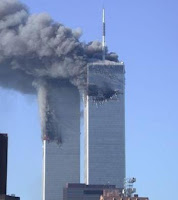 Something is broken in our world.  It is broken withing the hearts of men and women.  Everyone is broken and rejects God.  It's a blow, caused by our own sin, and it's fatal.  Sin expresses itself in such destructive ways.  Self-destructive, and pointed at others.

God watched as our first parents, Adam and Eve, rebelled from His authority over their lives,  The results were tragic.  And He intervened, preparing the way and then sending His own Son, Jesus, to pay for our sin and rebellion, and give us a new heart.  To take away the death blow of sin and put Jesus inside everyone who puts their faith in Him. 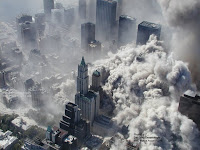 Sin and the soul-death it brings compelled 19 men and their associates turn 4 passenger planes into missiles for their political and religious agenda.  That decision was the product of sin's death-blow.  And it caused to much pain.
The awesome news is that pain and sorrow don't get the last word.

God does.  Heroism and courage were the common response in the moments after the attacks and the days that followed.  343 firefighters gave their life on that Tuesday morning to rescue many who were in those burning towers. These men and women are not forgotten.

So as you remember where you were on that ordinary morning, remember that God wants to intervene in your world, to wake you (and me) up from our drowsy state.  The brokenness of this world is meant for evil.  But God cannot be thawarted.

What was meant for evil, God can use for good, to help us leave fear, paralysis and apathy, and see that our plight, without Him, is hopeless.  And see Jesus, who is God's missionary, sent to earth to free men from sin and death.

Here is the picture video we will use this morning at theCityChurch worship gathering.

Credit to Yahoo! News for these photos.

We will be ending our Worship Gathering this morning by going to the Lake Charles 911 Memorial and praying as a church for the survivors, for our leaders, for our world, for the First Responders, for our Military, for America to hear the call of God to real life in Jesus, for the churches in our city and nation to live out the mission God has given of bringing his Life and Light to a broken world.

Posted by Paul Pettefer at 5:42 AM No comments: