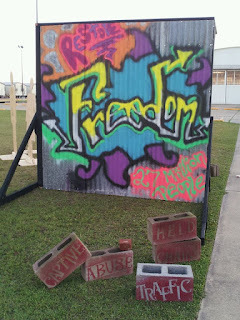 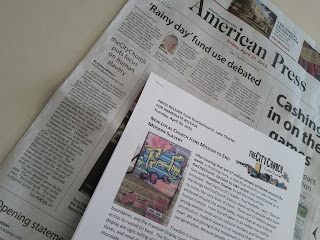 UPDATE: KPLCTV ran a story on us here.
And the American Press ran it on Friday on the top of Page 1 - we are so Grateful To Both!  The new about Freedom is so compelling - we come with the longing for it hard-wired  from God!


We issued this Press Release Yesterday - Thank you to the media outlets that tell the story of those who have no voice!

The Freedom Film showing is Today at Sowela, 1:30.  I'm praying that people see Jesus for who he really is.

After hearing that are 27 million people enslaved around the world, a shocking story, a new local church in Lake Charles, theCityChurch, decided to take action and constructed an 8 foot wide Freedom Display to tell the story of the enslaved.  theCityChurch’s leader, Paul Pettefer, says, “One of the things theCityChurch does is stand up for people who have no voice, the very least of these.  There are 27 Million people enslaved around the world today, more than at any time in human history.  From forced labor in an Indian rice mill to young women lured across national borders and forced into prostitution, modern slavery is an injustice that must end, now!  We are joining in the movement to abolishing slavery in our generation, because people should never be for sale!” 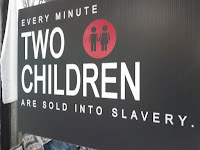 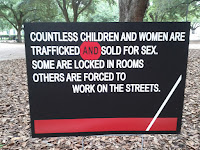 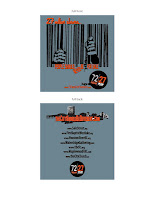 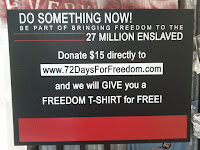 Paul continued, “We picked the motto, ‘The City Should Be Different’ because we want the measure of our success to be, ‘Is our city better off because we are here?’”    There are additional pictures and video on the church’s Facebook page, www.facebook.com/theCityChurch.


Freedom is a compelling message that crosses many boundaries, and the Freedom Display carries this message with a “Freedom” graffiti image across its rusted tin back.  The front of the display shows a faux jail-cell.  Inside and around the display are signs telling of the reality of modern-day slavery, cutouts of people representing slaves, and small displays of products that have slave labor in the supply chain (beans, bricks, chocolate, coffee, electronics, etc.).

This week the Freedom Display is up at Sowela, behind the Electro-Mechanical Building, with smaller displays around the campus.  There will be a screening of theFreedom Film Thursday at 1:30 in the campus library for students who are interested.  The Freedom Film is a 30 minute documentary of three individuals who were trafficked and held as human slaves, and how people who took the risk to care and get engaged brought Freedom to these three precious lives.

theCityChurch is encouraging people to start their exploration and response to this human disaster at www.72daysforfreedom.com.  This site contains TheFreedom Film, a response guide to the film, and a host of links and other resources.  People can get informed and then, most importantly, get engaged by learning, giving, hosting the Freedom Film, praying, and more.  The 72 Days website is hosted by a national group, Passion Conferences, www.268generation.com/passion2013/freedom/.)
theCityChurch also created a Freedom T-Shirt, and is giving them away to the first 100 people who donate $15 at www.72DaysForFreedom.com.  The donation does not pay for the shirt. The church is giving the shirt as a tangible expression of their gratitude for those who engage in this cause.  People can donate at the church’s weekly gathering at Stellar Beans Coffee, 319 Broad St, 10:45 on Sunday mornings or contact the church and bring a phone with the email receipt to receive a shirt.
theCityChurch is willing to bring the display and Freedom Film to other sites to tell the story of the 27 million whose voices are kept in hopeless silence by their captors.  Paul Pettefer, Church Planter, says, “We would love to bring the Freedom Display and the message of freedom anywhere people want us.  Just let us know – we’ll be there!”

Paul Pettefer, Church Planter at theCityChurch, said, “We believe that people should never be for sale!  Jesus said that those who follow Him should love each other and should love the very least of these just like we love Jesus.”

Paul also notes, “We want to model a lifestyle of personal involvement that spans from global to local - with worldwide issues such as 72DaysforFreedom.com or child sponsorship through Compassion International (www.Compassion.com) as well as engagement right here in our city, where we participate in activities such as supporting children at local schools, tutoring kids at www.HomeworkNight.com, connecting people and churches in our city, and other feet-on-the-ground actions.”

theCityChurch would love for you to have news coverage of the Freedom Display and tell the story of 72DaysForFreedom.  Please call/text Paul Pettefer anytime I can be of service, 794-9891, or paul@thecitychurch.us.  We are more than happy to be interviewed or provide additional pictures or video 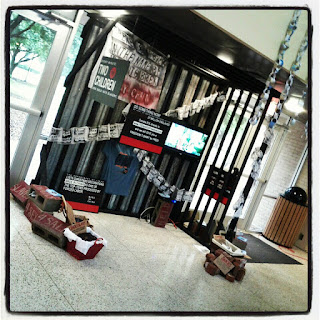